skip to main | skip to sidebar

People often ask me how and why I started making jewellery out of buttons. I'm by no means unique in doing so, in fact buttons have been used for more than functional fastening throughout history. 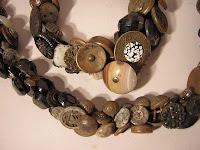 In 1520, King Francis I of France ordered 13,400 decorative buttons from his jeweller. They were sewn, purely as embellishment, onto a black velvet suit, which he wore to a meeting with King Henry VIII of England, in an effort to impress (or dazzle!) him into alliance. Button jewellery was in fashion in the late 19th and early 20th centuries, when young ladies would save buttons on long cords, called button charm strings, until they had 999 buttons. Not only would she seek buttons for her string but family members and friends would also give buttons to her. Apparently when the 1000th button was placed on the young lady's long necklace, her Prince Charming would appear!

During the Great Depression of the 1930s, turning buttons into earrings became a hobby for thrifty gals in America. They would take fancy buttons off their old dresses, and make earrings out of them as gifts.


My Grandmother was a seamstress, and during her many years of work she gathered a huge collection of buttons, some of which belonged to her own grandmother. Playing with the contents of Granny's button box was a delight every time we visited her house as children. We'd spill out hundreds of them to count and sort through the treasure, or use them as counters for Ludo and Snakes and Ladders, or as play money in an imaginary shop, or as pretend sweets at a dolly tea party.

My mom had a smaller collection, though there were sparkly and shiny gems to be found there as well, so over the years I liked to admire those too. I made my first button jewellery using some from that collection, over 15 years ago! I bent florist's wire into circles and then threaded buttons and tiny seedbeads on to make little rings for my schoolfriends.

After over a decade of dabbling in beading and making small pieces of jewellery, mostly for gifts, my sister and I found some of those button rings last year, and Magpie and Button was born when I decided to make button jewellery again!

The designs have changed but I do still make button rings, along with pendants, charm bracelets, earrings and necklaces. Some of the buttons I use in these pieces are new, but more of them have already had a previous life on a jacket or dress from many years ago. A few have even come from my own Granny's button box. 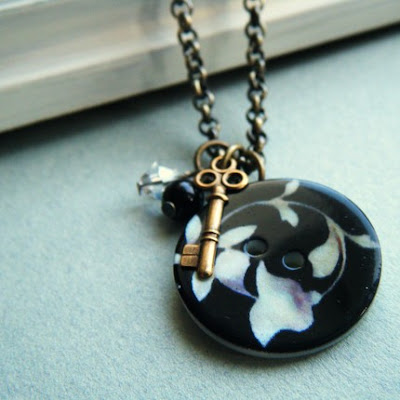 I just love the idea of re-using these old buttons to create something new and special, and have lately been thinking that probably many homes have a button collection somewhere... are there treasures stored away in a sewing box, sweet jar or cigar box in your house?
Posted by Magpie and Button at 6:51 PM 3 comments: 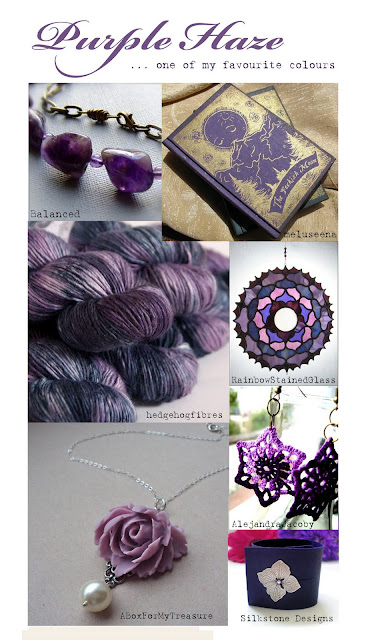 As I mentioned in a previous post, I've been using alot of purple in new jewellery pieces recently. I've also been seeking out purple pretties in other shops! Here is a selection of gorgeous purple items from some wonderful Irish Etsy sellers. From delicate mauve like the flower in this necklace from ABoxForMyTreasure, to the soft heather colours in hedgehogfibres' yarn and the really vibrant violet of AlejandraJacoby's earrings, purple can so versatile and pretty. I just love it!
Featured items:
Taryn amethyst and brass necklace by Balanced
The Peckish Moon handmade notebook by meluseena
Teardrop silk/merino yarn by hedgehogfibres
Stained glass suncatcher byRainbowStainedGlass
Purple crocheted doily earrings by AlejandraJacoby
Romantic purple rose and pearl necklace by ABoxForMyTreasure
Hydrangea leather cuff bracelet by SilkstoneDesigns
Posted by Magpie and Button at 6:20 PM 2 comments:

Magpie and Button
Cork, Ireland
I'm Beth, owner of Magpie and Button, and I've been creating unique bead and button jewellery for a number of years now. I started my Etsy shop back in 2009 as a bit of an experiment, but it went so well I kept it up and it's still growing today :) Ever since playing happily with the contents of Granny's button box as a little girl, I've loved and collected all kinds of vintage and new buttons. Now I'm sharing some of them with you by making them into pretty little pieces of jewellery. Visit my shop magpieandbutton.etsy.com to see some of my latest bits and pieces.

Promote your Page too